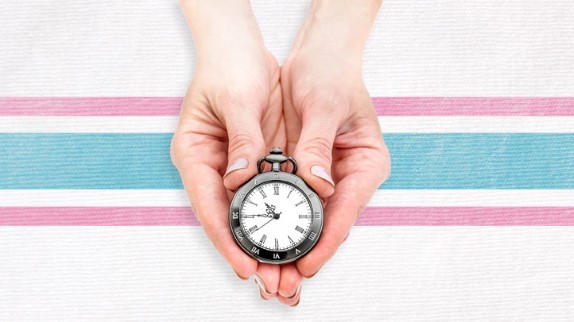 Every birth story is unique. In our series, “My Birth Story,” we’ve asked moms from all over the world to share their experiences of how they welcomed their little ones into the world. Here, you’ll find a range of stories, from moms who delivered vaginally or via C-section, alone or surrounded by family, even some moms who gave birth in under an hour. Their perspectives may all be different — but each one powerfully illustrates the emotion and beauty of giving birth.

I have big babies. Giant, even. My second son was 10 pounds, 14 ounces, and was a week early. So when I got pregnant with my third son, I decided to ask for an induction two weeks before my due date, on the grounds that my nethers couldn’t take anything bigger than the turkey I’d birthed prior. Unfortunately, as we’d just moved states, my new doctor refused my request, saying that since he hadn’t treated me before and I was already eight months along, he didn’t feel comfortable inducing me.

I made it to my due date. During a heat wave in Minneapolis. In August. I ate popsicles by the box, shoved bags of frozen veggies down my shirt, and fended off questions from strangers asking if I was having triplets (no) and if I was as uncomfortable as I looked (yes x 10). And then I sailed right past my due date. Surely the doctor would let me out of my misery now? Nope. He insisted that there was no real reason for an induction and he preferred “to let Mother Nature take her course.” You know, the same Mother Nature that makes poison dart frogs and hemlock.

Nature finally made her move nine days after my due date and I went into labor. As soon as I felt the familiar pains — this was my fourth delivery — I grabbed my bag and headed to the hospital, calling my doctor on the way. At the hospital, the nurses told me that my doctor had said I couldn’t possibly be in active labor yet and to send me home to wait a little longer.

“Oh, I am very much in labor,” I said through gritted teeth.

“You’re supposed to go to his office in a bit and he’ll check you there,” the nurse replied.

“You’re not supposed to stay.”

My husband looked nervously between the nurse and me, his super pregnant and increasingly angry wife.

“Why don’t you just go to his office first, I’ll call him and tell him you’re coming,” she finally said.

“I won’t make it,” I growled. And then I did what any woman who was so pregnant that she was standing in bare feet because not even flip flops would fit her swollen feet anymore would do — I sat down on the floor and burst into hysterical tears. Between sobs I informed everyone that I was not leaving this hospital until I had this baby and if that happened to be on the floor right here then so be it.

Then I puked all over the hospital floor.

Here’s a fun fact about me: Right when I start hitting the transition phase of labor — the horrifically painful part where you switch from dilating to being ready to push — I always throw up. My husband, recognizing this telltale sign, started yelling at random passerby to deliver my baby. (I mean, he almost fainted during our first birth so it’s not like he was going to do it.) One lady in the gift shop looked like she might even take him up on the offer.

I don’t know if it was my vomit or his hysterics but the nurses finally decided to take me up to labor and delivery. Once up there I knew I was in safe hands — those ladies know their business. There was no messing around, and I was promptly put in a hospital gown and on a bed. I had not stopped crying but at least I didn’t think I was going to die anymore. One nurse asked me if I wanted an epidural and a second one snapped, in a beautiful, lilting accent, that it was clearly too late for that. She hadn’t even introduced herself to my cervix yet but apparently she could tell by my screaming and clawing at the bed that I’d passed the point where drugs would be of any use.

“I need to puuuuuush!” I yelled.

By the time my doctor strolled in, that amazing nurse had already cut the cord, cleaned the baby off, taken his vitals, wrapped him up, handed my 10-and-a-half pound son to me, and was helping me nurse — a solid hour after all the action had happened. When he did finally come, he didn’t even acknowledge the fact that he had nearly made me into one of those news stories about a lady delivering her baby in a car on the highway.

Being born so quickly had an unexpected side effect, however. Apparently spending time in the birth canal, getting squeezed by contraction after contraction, has a purpose, beyond giving babies that lovely conehead look. All the squeezing wrings the fluid out of their stomach and lungs. Since my son missed out on that fun, he started choking and barfing up what seemed like gallons of liquid. They ended up taking him to the NICU for a few hours, just to make sure he’d gotten it all out of his lungs. I realized that had he actually been born in the car, things might have gone very badly for him, and I was even more grateful I’d ignored my doctor and thrown my adult tantrum in the triage area.

When people hear I delivered a baby in under an hour, the most common reaction is one of awe and even envy. (Well, from women. Most men don’t seem to want to hear my labor stories for some reason.) But the truth is that out of all five of my deliveries, his was the most frightening because it was so fast. It was just as painful as my “normal” births, but I had less time to prepare for the pain. I wasn’t sure what was happening and because my doctor and I weren’t on the same page, I felt like I couldn’t trust my own body. Even the aftermath was scary, with the trip to the NICU. Ultimately, everything turned out just fine, but the moral of this story is that when it comes to delivering a baby, maybe you should trust the lady actually carrying said baby.